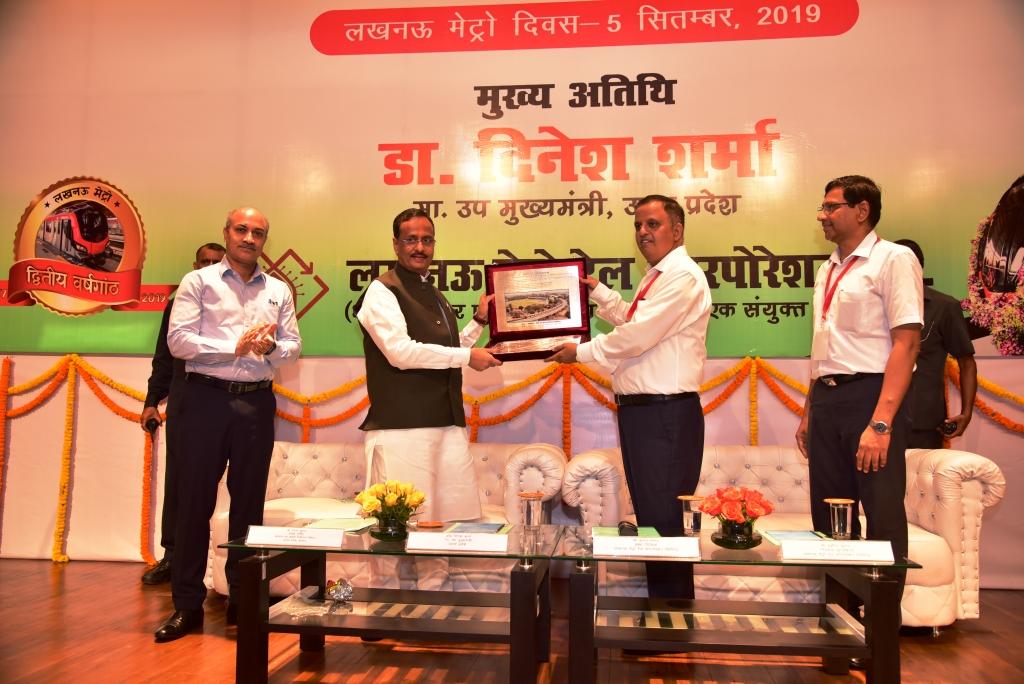 Lucknow Metro today celebrated Metro Diwas, 2019 in celebration of 2 glorious years of the successful commencement of commercial operations of Lucknow Metro services. The 2nd anniversary was organized at the auditorium part of Centre of Excellence for Training situated in Transport Nagar Metro Depot in grandeur. The event was graced by the esteemed presence of Deputy Chief Minister of State, Dr. Dinesh Sharma as chief guest and other dignitaries from the State Government like Shri Deepak Kumar, Principal Secretary, Ministry of Housing and Urban Development among others.

The programme began with lighting of lamp by the eminent Chief Guest Dr. Dinesh Sharma in the presence of LMRC Managing Director, Shri Kumar Keshav, senior officials and other LMRC staff to inaugurate the Lucknow Metro Diwas, 2019. It was followed by the unveiling of the “Lucknow by Metro” book and official Lucknow Metro Corporate Film in Depot’s auditorium. During the event a prize distribution ceremony was also held felicitating and recognizing the outstanding contributions of Lucknow Metro employees in various fields. MD’s Gold and MD’s Silver medals were awarded to the best performing staff associated with Metro Project, Metro Operations and Metro Maintenance.

Moreover, the best kept and maintained Metro Station award was awarded to the ‘Hazratganj Metro Station’ for the year 2018-19. The operational staff of Hazratganj was given a memento, certificate and a cash prize of Rs 10,000 in recognition of their outstanding performance.

On this occasion Shri. Kumar Keshav, Managing Director, Lucknow Metro Rail Corporation said, ”We should continue to be a role model in the Mass Rapid Transit System (MRTS) and we dedicate this day to the Lucknowites for their support and cooperation during this journey of 2 glorious years which has added 1.5 crores passengers along the way!